The Scientists ARE NOT Settled – The Global Warming Petition Project

Warming alarmists keep repeating the mantra that “97% of all scientists agree that global warming is occurring, dangerous, and will create long-term catastrophic results.”  Here’s proof that warmists have been “juggling the numbers” and have not been truthful.

The Global Warming Petition Project has more that 31,000 signatures from scientists who do NOT believe that man is the primary cause of global warming.
Published July 22, 2014 – 16:06

From The Global Warming Petition Project

A review of the research literature concerning the environmental consequences of increased levels of atmospheric carbon dioxide leads to the conclusion that increases during the 20th and early 21st centuries have produced no deleterious effects upon Earth’s weather and climate. Increased carbon dioxide has, however, markedly increased plant growth. Predictions of harmful climatic effects due to future increases in hydrocarbon use and minor greenhouse gases like CO2 do not conform to current experimental knowledge. The environmental effects of rapid expansion of the nuclear and hydrocarbon energy industries are discussed.

Political leaders gathered in Kyoto, Japan, in December 1997 to consider a world treaty restricting human production of “greenhouse gases,” chiefly carbon dioxide (CO2). They feared that CO2 would result in “human-caused global warming” – hypothetical severe increases in Earth’s temperatures, with disastrous environmental consequences. During the past 10 years, many political efforts have been made to force worldwide agreement to the Kyoto treaty.

When we reviewed this subject in 1998 (1,2), existing satellite records were short and were centered on a period of changing intermediate temperature trends. Additional experimental data have now been obtained, so better answers to the questions raised by the hypothesis of “human-caused global warming” are now available. 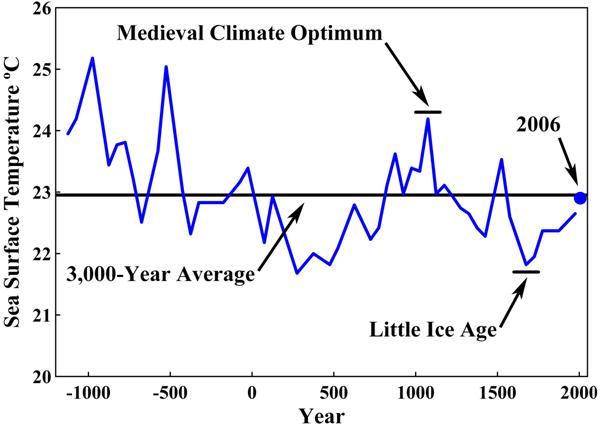 Figure 1: Surface temperatures in the Sargasso Sea, a 2 million square mile region of the Atlantic Ocean, with time resolution of 50 to 100 years and ending in 1975, as determined by isotope ratios of marine organism remains in sediment at the bottom of the sea (3). The horizontal line is the average temperature for this 3,000-year period. The Little Ice Age and Medieval Climate Optimum were naturally occurring, extended intervals of climate departures from the mean. A value of 0.25 °C, which is the change in Sargasso Sea temperature between 1975 and 2006, has been added to the 1975 data in order to provide a 2006 temperature value.

The average temperature of the Earth has varied within a range of about 3°C during the past 3,000 years. It is currently increasing as the Earth recovers from a period that is known as the Little Ice Age, as shown in Figure 1. George Washington and his army were at Valley Forge during the coldest era in 1,500 years, but even then the temperature was only about 1° Centigrade below the 3,000-year average. 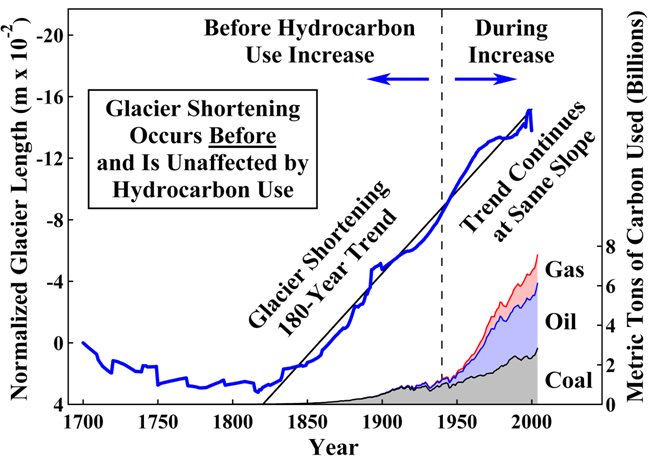 Figure 2: Average length of 169 glaciers from 1700 to 2000 (4). The principal source of melt energy is solar radiation. Variations in glacier mass and length are primarily due to temperature and precipitation (5,6). This melting trend lags the temperature increase by about 20 years, so it predates the 6-fold increase in hydrocarbon use (7) even more than shown in the figure. Hydrocarbon use could not have caused this shortening trend.

Read the rest of the review paper …