ACORN – Have They Been Crooks for Years?

Newspaper articles as far back as the seventies describe how ACORN and its subsidiaries mis-used taxpayer money.  It should be NO surprise today that they are still up to the same tricks.  They’ve gotten better at it over the years.  Now they are in line to get big, big bucks from Washington as part of the stimulus package.  However, no one in Congress has insisted that they be investigated and audited.

Here are a few tidbits from the Consumers Rights League:

In 1977 — three decades ago — ACORN accepted a $470,000 federal grant through VISTA (Volunteers In Service to America) to train volunteers to help low-income citizens.  A Congressional investigation found that ACORN had illegally used the money for labor organizing.

In 1994— the Clinton Administration (through Americorp) approved a grant worth of over $1 million to AHC (ACORN Housing Corporation) which was supposed to help low-income folks find affordable housing.  The Americorp Inspector General found that ACORN used government funds to register low-income individuals for paid memberships into ACORN – a violation of Federal law.  The IG also found “inappropriate transactions” charged to ACORN by ACORN employees and other non-ACORN related entities.  This grant was revoked.

In 1996 – Project Vote (an ACORN activity) was implicated in money laundering for Teamsters, passing $175,000 to the Clinton campaign and other Congressional Candidates.

PDF Reports on ACORN by CRL

In 2003 — Sol Stern from the Manhattan Institute outlined manipulation of the Community Reinvestment Act by ACORN.
According to Stern:  ACORN loudly campaigns against “predatory lending,” “redlining,” and other forms of presumed abuse by financial institutions that  supposedly hinder the minority poor from getting the capital needed for home buying and business start-ups. As an antidote, ACORN has latched on to a 1977 federal law, the Community Reinvestment Act (CRA), which was aimed at ensuring that banks do not discriminate against poor minority communities … ACORN has found a use for it beyond wielding it as a propaganda tool to suggest that “redlining” still exists. ACORN has developed a lucrative niche as an “advisor” to banks seeking regulatory approvals.  Thus we have J. P. Morgan & Company, the legatee of the man who once symbolized for many all that was supposedly evil about American capitalism, suddenly donating hundreds of thousands of dollars to ACORN. This act of generosity and civicmindedness came, interestingly, just as Morgan was asking bank regulators for approval of a merger with Chase Manhattan. Not to be outdone, Chase also decided to grant more than $200,000 to ACORN.

There are hundreds of articles and investigations that outline the corruption of ACORN and its affiliates.

Try this on for size.

“Last October The New York Times killed an ACORN/Obama expose for which ACORN whistleblower Anita MonCrief was willing to be a named source, so that Obama would be elected.”   This is an excellent piece by Michael J. Gaynor on webcomentary.com.

And, if you encroach on ACORN’s territory and try to provide assistance directly to the low-income community, then ACORN will try to undermine your efforts to re-claim their influence.  That’s what happened to Brandon Darby of “Common Ground Relief” when his organization hit the streets to provide assistance in New Orleans months before ACORN re-opened their office.

To add insult to injury, ACORN denies to its members that it receives any Federal funding.  This is straight from their web site. 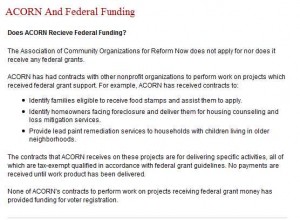 Considering ACORN’s track record for voter fraud, their strong-arm tactics with banks, their obvious lack of regard for the people they claim to serve and their blatant mis-use of taxpayer funds, it is time to cut them off from the “public trough”.